So many good reasons to stay in this magnificent Dordogne Périgord region, to discover or rediscover!

Come now and enjoy the calm of Villamblard, a village ideally located equidistant (about 25 kilometers) from Périgueux and Bergerac in the Dordogne Périgord! You will find a bakery, groceries, tobacconist and press, hairdressers, hardware store, doctor’s office, pharmacy and garage man.

It is also in Villamblard that the renowned Clovis Reymond distillery is located as well as the 13th century Château de Barrière (free visit).

Périgord is undoubtedly one of the French departments with the greatest number of riches.
This region is marked by a wide cultural, archaeological and historical heritage.
Visit castles, mansions, abbeys and bastides – Discovery of caves, chasms and troglodyte sites – Culture in museums – Stroll through majestic gardens – Discover the many small villages of Périgord – Live in time for a moment in 1900 at Parc du Bournat in Le Bugue – Stroll through the markets – Taste local products…
There are so many things to do in the Dordogne!

We cannot talk about Dordogne-Périgord without mentioning gastronomy. The products of Périgord are for some world famous, of which here is a small overview:
– The wines of Bergerac, the famous Monbazillac, and the renowned Pécharmant.
– Liqueurs and brandies from the old Périgord distilleries.
– Walnuts, strawberries, tobacco…
– The duck, the pigeon….
– Foie gras, truffles, porcini mushrooms from Périgord
– Michelle’s Walnut or Almond & Hazelnut Cake: “L’Escuròu Gormand dau Perigòrd” 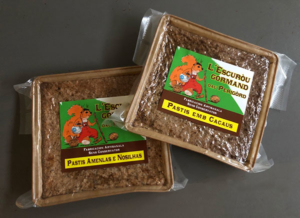 Discover the 4 colors of Périgord!

Le Pontillou is the perfect starting point to explore the four Périgords with their varied splendours.

The Périgord Blanc: Périgueux in the center and its historical monuments »

Périgueux and the Isle Valley… 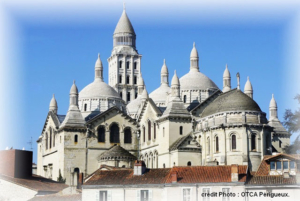 Located in the heart of the Dordogne department, the PÉRIGORD BLANC is so named because of the whiteness of the country’s stone, incomparable for exercising the art of sculptors.
It is criss-crossed by the Isle and Auvézère valleys which are ideal for fishing.
Périgueux is the old Cité Vésunna; you can notably admire its Gallo-Roman remains in the heart of the reconstructed museum of Vésunna. Périgueux is also the capital of the Dordogne department and has been classified as a “city of Art and History” thanks to its narrow streets lined with private mansions, its preserved districts and its Saint-Front cathedral, itself classified as a Unesco heritage. The roads to Santiago de Compostela are included in the same title.

The Périgord Noir: Natural region with its caves and truffles »

The Périgord Noir does not owe its name to the truffle but to the presence of a high concentration of very dark holm oaks. Cradle of prehistory, it is also full of unmissable sites from the Middle Ages and the Renaissance…
The Vézère valley conceals some of the richest sites of European prehistory (Paleolithic sites, caves and natural shelters). There are fifteen decorated sites classified by UNESCO as World Heritage of Humanity. The Périgord Noir is the International Pole of Prehistory of the Vézère Valley and the Dordogne Valley.

Sarlat
Sarlat-la-Canéda, old fortified town of the Dordogne, in the heart of the Périgord Noir, can be visited on foot.
The city originates with the monastery built in the 9th century. Its religious activity will allow it to reach dimensions comparable to those of Périgueux or Bergerac in the 12th century. 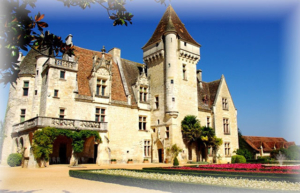 Ranked among “the most beautiful villages in France”, this village in the Dordogne offers a great wealth of heritage.
The Château des Milandes is one of them. Former residence of Mrs Joséphine BAKER, we discover her extraordinary life in a warm and colorful decor. In the gardens, raptor shows are offered to the delight of adults and children alike!

Belvès
A medieval town with 7 bell towers in the Dordogne, the town of Belvès sits on a rocky outcrop overlooking the Nauze valley.

Beynac
On the banks of the Dordogne, Beynac is classified as one of the most beautiful villages in France.
It is made up of a medieval village with houses hanging along the cliff, dominated by its fortress.
Do not hesitate to take a boat trip on the river below; canoes-kayaks are also available during the season. Pedestrian paths are also accessible there.
To visit: Château de Beynac, Museum “The first peasants”. Archaeological Park. Church of Cazenac.

Les Eyzies
At the confluence of the Vézère and the Beune in the Dordogne, the town of Les Eyzies occupies a pleasant site in a setting of crowned cliffs.
A visit to the Fort du Roc de Tayac is a must. The Marie guide will enchant you.
This world center of prehistory is known for the abundance of its archaeological riches.

Montignac
Montignac is a city known worldwide for its very famous “Grotte de Lascaux”.
Only its facsimile can be visited today. It is the gateway to the Vézère valley, nicknamed the “Valley of Man”, and its many sites. It is also the starting point for canoe-kayak excursions.
To visit: Cave of Lascaux. Regourdou site (view of the abyss. Birthplace of bear worship museum: live bears).

Purple Périgord: Bergerac and its vineyards » 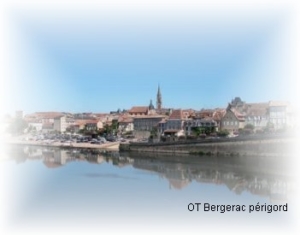 Bergerac
In the heart of the Dordogne valley, in the center of prestigious vineyards (Monbazillac, Pécharmant), Bergerac will charm you with its mild climate.
It is the capital of the Périgord Pourpre in the Dordogne. Along the water, by canoe or barge, let yourself be seduced by the richness of the landscapes that stretch on both sides of the Dordogne River and by its remarkable historical, natural and cultural heritage.

Issigeac
Located to the southeast of the Monbazillac vineyard, Issigeac is a small town which has retained the originality of its narrow streets. In particular, you can admire a 16th century church built by Armande de Gontaut-Biron, with a rare Gothic style in the Dordogne Périgord.

Monpazier
Monpazier is undoubtedly the best preserved bastide in Périgord. It was built to complete the lines of defense already formed with the foundation of the bastides of Lalinde, Beaumont, Molières and Roquépine, with the aim of protecting the road from the Agenais to the banks of the Dordogne.

The Périgord Vert: To the north, with its dense and preserved nature »

Around Périgueux and the Isle Valley…

Brantôme
Green Venice of Périgord, Brantôme is a tourist and cultural center of the Dordogne department. Its important prehistory museum, the numerous prehistoric and megalithic sites in the surroundings, its Celtic and Gallo-Roman memories, its “cluzeaux” and troglodyte dwellings testify to its antiquity. Its magnificent bell tower (in reality a “campanile” built on the rock), studied by Viollet-le-Duc, is said to be “the oldest in France” with its basic “protocupola” and its Carolingian capitals.

Saint-Jean de Côle
A picturesque medieval village in the Dordogne Périgord, Saint-Jean-de-Côle offers a prime setting for many historical film shoots.
The castle of Marthonie (listed M.H., open to visitors in July and August) dominates the main square of the village with its magnificent set of 12th century towers.

Holidays also sporting for fans of:

Hiking: many routes are referenced at the Mussidan tourist office. But we must mention the GR654 long-distance hiking trail: Pilgrimage of Santiago de Compostela which crosses the Dordogne from north to south passing Douville 4.5 km from the campsite (Thiviers, Négrondes, Périgueux, Douville, Bergerac).

Tennis: tennis courts in the village.

Bike rides will also allow you to see sites of great beauty.

Sail on the Vézère or the Dordogne in barges, canoes, paddleboards or kayaks.

After all that, rest at Le Pontillou campsite, in the middle of nature, in peace, where good humor is essential.

You will find in the camping guide available in the rentals and at La Paillote, some activities in the surroundings.

To complete, we offer flyers from the Dordogne Departmental Tourism Committee, available at the Boutique.

To immerse yourself before you come, watch in replay on France 5 the excellent report on the Dordogne-Périgord of the show “Echappée belles”: click here…